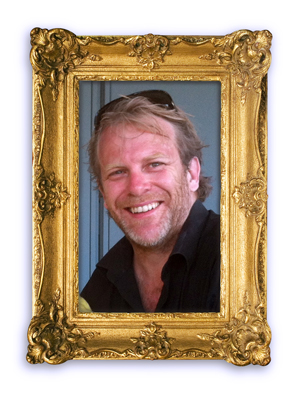 Hello and thanks for coming….

That’s me in the ridiculously over the top gold frame.

I’m a director with a specialisation in computer animation and visual effects. I do all my own post production work and am always looking for projects that get the brain whirring.

But, no job is too small.

A progression across decades of technology change

How did I get here ?

From the early days of the computer room at Narrabeen High School to my very own Commodore64 I always gravitated to the paint programs. I’m unsure why, but it was the first program I tried. I wanted to know how many colours there were and whether you could change the size of the brush. Valid questions back in that technological time. A chance meeting at the bus stop each morning for the school bus was where I met Andy Farrell and he said on the bus one day “These computers are going to be big”.

I had no idea that any of that could or would lead to a career.

My mum once said “That computer will never amount to anything” in a moment of frustration when she could not get me to leave my C64 alone. That was around 1982. She and I have had a laugh or two on that over the years.

The first of many ‘lucky breaks’ came when a Television pioneer Mr Peter Benardos, needed someone with experience on a Commodore64 to help with his new kids quiz show on SBS called ‘VizQuiz’. I found myself working with seasoned TV professionals such as Bob Huber and many others in a TV studio each Saturday. I was excited, nervous and in awe of what I was surrounded by. I can still vividly remember Peter sitting me down to explain what ‘timecode’ was.

The adventure continued when we went to a ‘Post Production’ company in Clarendon St Gore Hill called Videolab to create opening titles. This was the first time I’d seen such a company. Racks and racks of hardware, video tape machines whizzing, large control panels with orange glowing buttons and computers unlike I’d ever seen.

We also went to a post production company in Crows Nest called Omnitel (part of Omnicon) to do some more post production work and that’s where I first met the lovely Frayne. It changed my perception of women in the workplace as I had only ever seen the other side of Dad going off to work. Frayne was in charge and it was ok. That lady had her shit together.

Thankfully, the four ‘Wizards of Vid’ from Omnicon, Philip Austin, Ian Richardson, Peter Davies and Danny Dicklich gave me my next gig using a contraption called the Quantapaint. It was a hideous beast. It only had 256 colours. Frames of colour video that it captured would become black and white, slightly squeezed horizontally and shifted just a tiny bit to the left.

Omnicon was a great company to work for with a true ‘family’ spirit, great Christmas parties and incredible client service. My grounding in the industry occurred in my time there and I am truly grateful. I met some people who would continue to be great mates like Russell Masters, Peter Barton and Tony Cole. I met my wife and the mother of my three children there as well. So, all up, it’s cost me a small fortune. Peter Barton landed a job in Malaysia and departed Omnicon, but three months later I got a call and a massive adventure began.

Peter had recommended me a position at APV in Kuala Lumpur Malaysia where he was working and off I went. I was running the graphic department and part of the work permit requirement was that I would train one of the locals and that was the lovely Aznin Yusof. During that time there was masses of work to do but we had lots of fun and I developed friendships that still endure. I adopted a new brother from another mother Dave Singh in that adventure as well. I also worked with and became good friends with a Aussie guy, Tim Grass who had been working around the corner from me in Crows Nest. Tim and myself are still collaborating, but it’s in the VR and AR these days.

From there I was able to return to Sydney with a gig at Animal Logic thanks to Chris Godfrey and Zareh Nalbandian. This was life saving as the apartment block in Malaysia, ‘Highland Towers’ where I lived collapsed killing 48 people. Although the hours were long at Animal Logic in Crows Nest, it wasn’t all that bad in the larger scheme of things. I worked with some amazingly talented people there and have made some more life long friends. That’s where I met Kit Devine and Grant Fraser which is how the DLF originally formed.

After Animal Logic, I went freelance for a while before Russell Masters dropped my name in the hat with Andrew Robinson at Videolab. We set up the 3D department there in beautiful industrial Artarmon. It was a great place to work and we did some great work. So many great friendships came from that chapter.

Around 1999 the WindowsNT computers started to push the beautiful Silicon Graphics computers out the door in the race for sheer grunt. It was a turning point for the industry and it also pushed me towards starting my own company dedicated to 3D animation, so Fire Horse Studio was born. It started in the back of the family home in Seaforth and my twins Mark and Zane were only 4 months old at the time. It grew with freelancers and at one stage I had 12 people from Dentsu Japan, the worlds largest advertising agency trying to cram into the back shed. They took turns being outside, smoking and looking through the window. I was worried about how it all ‘looked’ and at the end of the project they said that it appeared that they were getting ‘very good value’. Perception huh. It’s a funny thing.

Fire Horse grew into more rooms at the front of the house until the big move to an office down at the Spit in Mosman. Meanwhile, Russ was running his own shop ‘Fanatic Films’ and we found we were doing so much in parallel that we decided to join forces and form ‘Safety In Numbers’ operating from Pyrmont. We had a great run and did some amazing work. We found over time that we were trying to head in two different directions and decided to un-merge. Nigel Haslam and Chris Gardner who had been long time Fire Horse employees had decided to use this point in time to move on and I found myself without the need to run a company to keep everyone employed. I could be an employee again.

Three days later, an ad popped up on the DLF for a job as head of 3DVFX at FSM. Thanks Rick, Thanks Steve. I was over in Northbridge where I got to meet a whole new crew of people and some familiar faces. Once again, I found myself working in a great company and with great people which has been luckily for me, very consistent.

Many years working at all these facilities has meant that I worked with lots of directors. I have worked with some of the best, and some of the worst. It’s a long list and there’s more good ones than bad. In a strange way, the bad ones were inspirational. I would look at what was occurring and think…”I could do that”. There was much more to the craft than a naive outsider could imagine and there’s still much more to learn. But as it turns out, each director was teaching me something. Likewise, every colleague working side by side with me has also taught me many things along the way.

The directing path is why I moved from FSM to Engine, hired by Adam Wells and Cal Gardiner. I was VFX supervisor on projects for in house director Simon Robson and was directing my own projects as well. The fabulous in house chef Jean-Paul Bruneteau kept everyone so well fed and politically informed it was a pleasure having that 5 mins making a coffee in the mornings.

In 2012 I left Engine and once again have gone freelance and so far so good. The work varies between some large and some small, but it’s a great thing to be able to work in a creative industry if you’re that way inclined.

These days I work in nearly every capacity required to get a project from start to finish. I produce, direct, edit, grade and do all the visual effects on my own projects. I do sound mixing for content work and send final commercials to stations, so it’s really a start to finish scenario. One stop shop isn’t quite right as I still get DOPs to do their thing and work with composers such as the great Colin Berwick on projects that require music composition.

I have been blessed with skills that have let me travel the world and meet an amazing array of people. Many of them are still my friends outside of work. I am forever grateful for the career I have had so far.